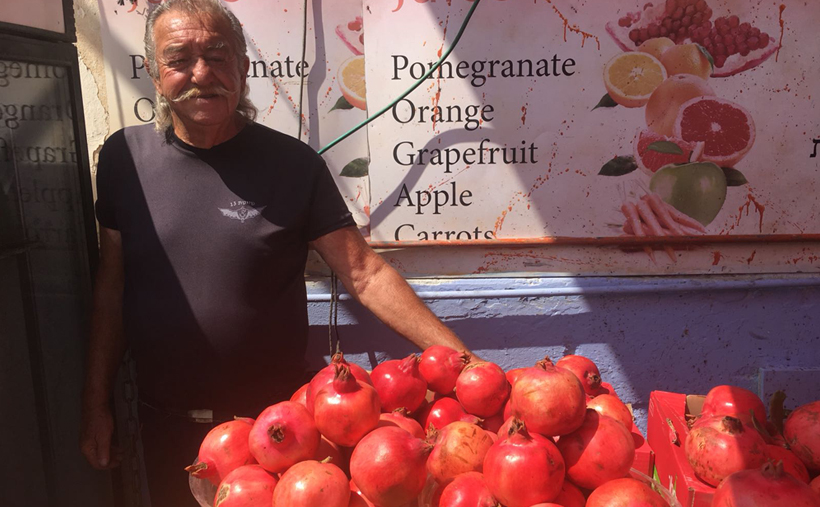 Avi and the pomegranate mojito

Rosh Hashanah, the start of the Jewish New Year, is a time for sending good wishes and making solemn resolutions. Traditionally, it’s a holiday with lots of praying and even more eating. But for Avi and many others, Rosh Hashanah is also about a little red-purple fruit with lots of seeds.

That’s because the rimon or pomegranate comes into season around Rosh Hashanah. Cultivated in Israel and the Middle East for millennia, the rimon has an impressive history. It is one of the seven species, the key foodstuffs of biblical Israel. The High Priest used to have a picture of a pomegranate embroidered on his holy robes. Pomegranates were mentioned in ancient Jewish texts and engraved on ancient Judean coins.

The rimon is still a hit today and will be on the menu for many families during the holiday. It’s also peak season for pomegranate juice at kiosks all over Israel, including at Avi’s juice joint in Tzfat. Avi believes that a good glass of pomegranate juice “lowers your blood pressure and leads to long life.” In the Bible, the rimon is a symbol of love and fertility and Avi likes to tell his male customers about its supposed connections with sexual potency. If you’re looking to test out these theories, don’t forget that scientists suggest that the nutritional benefits of a pomegranate come from its seeds.

The seeds are important for other reasons. They’re symbols of unity. There’s a tradition that each pomegranate has exactly 613 seeds, corresponding to the 613 biblical commandments (mitzvot). In fact, pomegranates can have anything from 400 to 2000 seeds but who’s counting? The point is that on Rosh Hashanah, many people, before munching on some rimon seeds, pray that in the coming year they will be as full of commandments as the pomegranate is of seeds.

Avi knows fruit. He has worked as a driver transporting fruit and vegetables around the country. Ten years ago, he opened his juice store in Tzfat, a city in the north famous for its connections with Kabbalah and mystical art. “My family have lived in Tzfat for nine generations,” he says. He loves chatting with his customers, especially tourists as “they’re so polite.”

There are plenty of great ways to enjoy pomegranates this Rosh Hashanah, including this mojito. L’chaim, here’s to a joyous New Year. 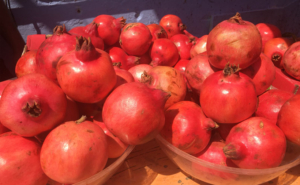 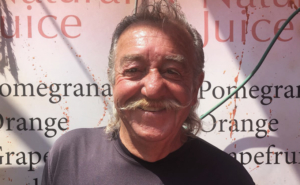 Preparation
Use a large glass with room for plenty of ice.
Put rum, lime juice, simple syrup and pomegranate juice in glass. Mix well. Taste, and add more sugar or lime juice if needed. Add some crushed lime peel if you like.
Crush mint leaves from one sprig, add to drink and mix.
Add a handful of pomegranate seeds.
Add a one-second to second-and-a-half pour of club soda.
Top glass with ice.
Garnish with remaining mint leaves. 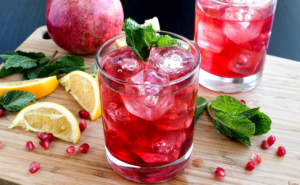