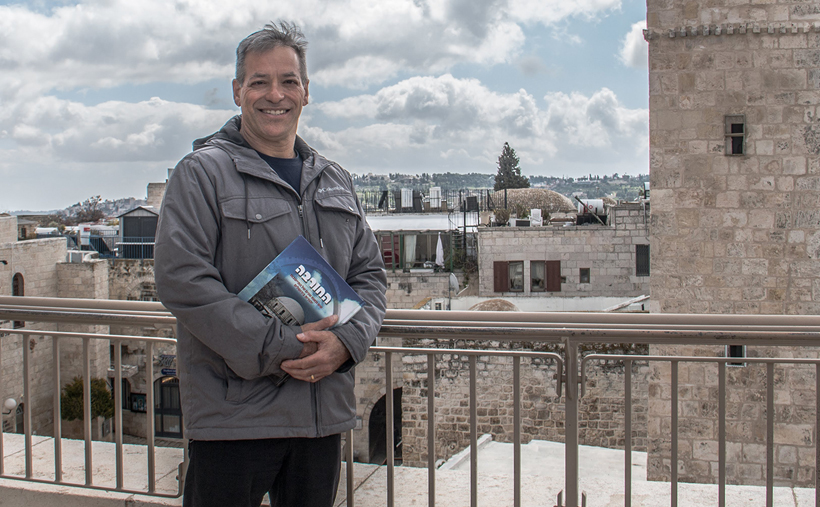 A Burned Scroll That Still Tells a Story

Rabbi Joel Sisenwine has brought many congregants to Israel before but for his current trip he packed something very special in his luggage: a portion of a burned Torah scroll rescued from an attack in 1925 on Jerusalem’s famous Hurva synagogue. As he returned the Torah scroll to the synagogue, Rabbi Joel felt like a shaliach (emissary). “It was a beautiful, unique feeling. The return of this burned Torah scroll expresses the notion of going from ashes to revival, which is such a vital part of the story of Israel.”

The Hurva, one of the great synagogues of Jerusalem’s Old City, survived the riots of the 1920s but was destroyed, like many Jewish sites, by the Arab Legion during the 1948 War of Independence. In 2010, after a long rebuilding process, the synagogue reopened. Rabbi Joel relates that synagogue staff had tears in their eyes as they received the rescued parchment, which will be displayed at the synagogue entrance.

The emotion was strong on both sides as the burned parchment was carefully handed over. “They told me that our parchment is the only part of the scroll that survives. The parchment is about 15 inches by 10 inches. The edges are completely burned but you can still make out some of the words and see that it recounts the story of Noah. As the people from the Hurva said at the ceremony, the story of Noah is about the destruction of the world followed by a new beginning. They were so moved because for them this returned parchment symbolizes the destruction of the synagogue and its rebuilding.”

The story of how the Torah parchment found its way back to Jerusalem is a remarkable one. “I was leading a group from Temple Beth Elohim, my community in Boston, on a tour of the Old City. I was discussing the unusual connection between our synagogue in Boston and the Hurva. Our new synagogue was built in 2010, the same year the Hurva reopened. Our architect had chosen the specific stone we used on a trip to the Negev. At that time, only one other synagogue from all over the world was there choosing stone. Which one? The Hurva. But as I was talking, the connection between the two synagogues suddenly got stronger. One of our members, Rebecca Cohan, mentioned that she had part of a burned scroll from the Hurva in her basement back in Boston. It had been rescued in 1925 by Mordechai Caspi, a prominent Jewish figure in Jerusalem at the time. In 1952, Caspi’s widow Rifka, for a reason we don’t know, gave it to Rebecca’s grandmother, a distant relative.” For almost seventy years, the parchment has been safeguarded by Rebecca’s family until that fateful conversation in Jerusalem. “As soon as we got back to Boston and I saw the scroll, I knew that it belonged here in Israel. Rebecca agreed.” 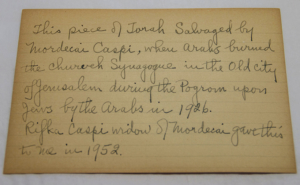 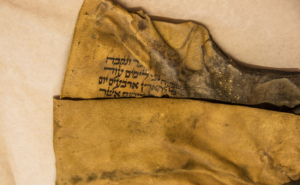 For Rabbi Joel, a journey to Israel is about finding that sense of belonging and connection. “My goal when we start a trip is always that we deepen our appreciation of the miraculous nature of Israel by understanding its challenges and complexities, as well as its beauty and miracles. It works every time!”

“I myself have been to Israel seventy times but even I am still constantly amazed by this place. I will never forget my first trip at age 15, how moved I was by the people and the land. But, over and over again on my journeys to Israel something unexpected, something incredibly moving happens, like the return of the parchment. On every trip, there are chance encounters where a connection occurs that is truly divine.” 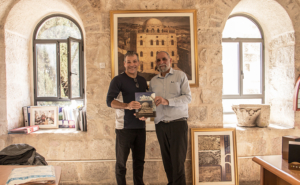 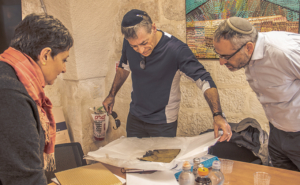