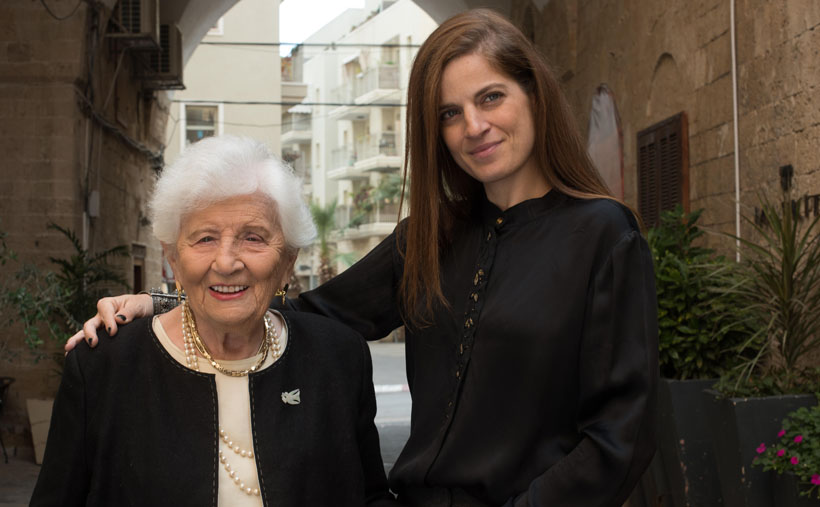 Haute couture from the desert

Sharon (top right in the cover photo) is putting Israeli-made fashion back on the map.

The glory days of Israeli haute couture were in the 1950s and early 1960s, when everyone who was anyone was wearing a Desert Coat. Inspired by the shawls of Bedouin women, the coat and other high-fashion items made by the Maskit fashion house were on the cover of Vogue, stocked in the most exclusive of New York stores, and worn by celebrities from Audrey Hepburn to Queen Elizabeth.

But fashion never stays the same and in 1994 Maskit, Israel’s only major fashion house, closed its doors. It was Sharon who opened them again. “I’ve loved fashion since I was a child. I would help my mother design and make our clothes,” says Sharon. “After studying at the Shenkar School of Design, I worked with Alber Elbaz in Paris and with Alexander McQueen in London.” When she returned to Israel in 2011, pregnant with her first child, Sharon was considering taking a break from fashion until her passion was reignited by a Royal Wedding. “I saw Kate Middleton on television, wearing an Alexander McQueen dress, marrying Prince William. It started me thinking about what I could achieve in fashion here in Israel.”

Sharon began researching the past success of Maskit. As she explains, “Maskit (named after the biblical term for accessory) was founded in 1954 by Ruth Dayan, one of Israel’s first female entrepreneurs. She was the first wife of Moshe Dayan, the general and politician. The Government wanted Ruth to teach agriculture to immigrants but she saw that these women from Yemen, Morocco, Bulgaria, from so many countries, had brought with them amazing embroidery and clothing. Why not focus on fashion rather than farming and create clothing out of the melting pot of cultures here?” The result was a Government-owned fashion house that provided work for poor immigrant women yet made a big splash in the big business of luxury fashion.

In 2011, Sharon met with Ruth Dayan to discuss reviving Maskit. Dayan, at that time aged 94 (she’s now 101) gave her blessing and provided input as Sharon went about making Maskit once again the home for high fashion in Israel. “We make luxury clothes which are suitable for all women, regardless of age or size,” says Sharon. “We do new versions of the desert coat and the iconic early collections, but also bridal wear, evening gowns and high-level more casual clothing. I’m always thinking about the next collection.”

As Maskit’s head designer and co-owner, Sharon is fulfilling her ambition of creating Israeli fashion with an international reach. “Maskit House in Jaffa-Tel Aviv is our flagship. It’s our showroom but also where we design and make our clothes. Visitors can see the whole process from the first sketch to the completed garment. It also has a gallery tracing the history of Maskit.” Maskit is worn internationally as well as in Israel. ‘We’re constantly expanding our international sales and exhibitions. It’s a busy life. I’m in New York ten days every month.”

This mixture of local and global is the spark for Sharon’s creativity. “There is no one center for fashion, every place has its own magic. I love Parisian fashion for its romance, prestige and heritage. London is more avant-garde, they break the limits there. New York fashion is fired by the commercial point of view.”

“What shapes Maskit is Israel’s cultural cosmopolitanism, the mingling of all the cultures here. When I’m designing, I go to historical sites like the Western Wall, old Jaffa and Masada, to feel how they attract people from all over the world. And my fashion also reflects the country’s geographic diversity, that you can be in the desert and an hour later be in Tel Aviv, one of the world’s most diverse cities. These features of Israel are always taking me in new directions. They are my inspiration.”