The Eurovision Song Contest is an annual international song competition with participants representing European countries. Each participating country submits an original song to be performed on live television and radio, then casts votes for the other countries’ songs to determine the winner. Last year, Israel singer and artist, Netta, won the contest, held in Lisbon, Portugal, with her song “Toy,” marking Israel’s fourth win in the Eurovision Song Contest. 1.3 million viewers in Israel tuned in to this year’s Eurovision.

Last Friday night, Eurovision reached the walls of the Daniel Center for Reform Judaism in Tel Aviv as song leader and performer, Shimon Smith, led Shabbat services to the tunes of beloved Eurovision hits. We spoke to Shimon about his impressions of the Eurovision, and how music has the power to bring people together from all over the globe.

Tell us a little bit about your musical background.
Music is my life. During the week, I perform and teach music, on the weekends, I lead Shabbat and holiday services, and in the summers, I teach music at camps across America. I am a proud graduate of the Rimon School for Music & Jazz and was the bass singer for the A Capella variety show, the Voca People, for seven years.

Describe your experience leading services for tourists.
It is amazing to connect with Jews from all over the world. I often hear many different languages being spoken before and during the services I lead, but the minute we begin singing, we are all speaking the same language. Music breaks down walls, pierces through cynicism, and is a means for people to share emotions and feelings.

Where do you generally lead Shabbat services?
I am the cantorial soloist and head song leader for Daniel Center for Reform Judaism, but I also have led Shabbat prayers at the beach, ancient ruins, and under a tree in a forest setting. Each experience and venue has its own beauty and magic, and I try to strike a balance between singing popular tunes that tourists will recognize and exposing them to new Israeli tunes. All around the world, people are singing Kabbalat Shabbat (songs to welcome Shabbat); it is humbling to realize we are just one part of the global picture.

You just led Kabbalat Shabbat Eurovision-style. How was that?
Yes, I was challenged by Rabbi Meir Azari to create a Eurovison Kabbalat Shabbat. It took me many hours to adapt the Israeli Eurovision hits to the prayers – but the atmosphere in the room last Friday night was incredible. Everyone was singing along and participating, and I got great feedback afterward. I would love to do a Eurovision-style Shabbat every year.

As a resident of Tel Aviv, and a musician yourself, what were your impressions of the Eurovision Song Contest?
Israel did a phenomenal job hosting the Eurovision; we have a lot to be proud of. I also think we gained a tremendous amount. There is so much division and polarization in Israel – but during the Eurovision we were united, rooting for our country. Netta, Kobi, and Shalva – three very different performers from different backgrounds – and yet they brought Israel together. That is the power of music. As a musician, did I think all the music performed was great? Not at all. In fact, some songs were so bad, they were almost good. But singing is not just about your voice and being on key. It is about being yourself. And when you are yourself, you can be open and connect to the people around you. 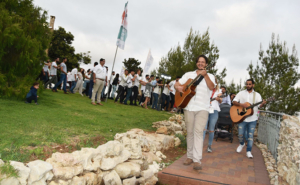 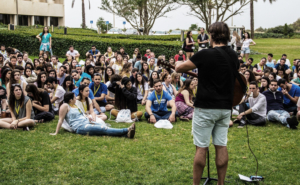