The elections last week were not the only event that had Israel glued to its television sets as it watched – sometimes cheering, sometimes screaming – history unfold. The unmanned Israeli spacecraft Beresheet (Genesis) came within a few miles of emulating the space superpowers of the USA, Russia, and China by landing on the moon. Then, as the country held its breath, the main engine failed, and the spacecraft crashed to the lunar surface.

Scientist and educator Dr. Yael Schuster (who writes under the name Dr. Mom) was so inspired by the idea of Israel on the moon that she created a children’s book about it called The Little Spacecraft. She believes that crash or no crash, the mission was a remarkable example of Israeli innovation. Despite a miniscule budget compared to other nations, Beresheet and Israel made it beyond the earth’s orbit and to the very edge of the moon. “Where else could you have this scrappy little spacecraft and people who didn’t listen to ‘no’ a million times over?” asks Yael. “The things it achieved seemed impossible. It showed that Israel is so good at being the Start-Up Nation because people here dream big.”

Yael’s book The Little Spacecraft, produced in partnership with the Israeli non-profit Space IL which was behind the lunar mission, tells the story of Berrie or Beresheet. “Berrie’s a little toy spacecraft with a big dream of making it to the moon,” says Yael. The book merges scientific information into a tale of little people doing big things with the help of their friends.

Storytelling is one of the ways that Yael and her educational multi-media company, StellarNova, try to get kids, all sorts of kids, excited about science. “I came to Israel at age 20 from the US but when I tell people I have a PhD in organic science they make a funny face like science is a horrible thing. It’s not. It’s cool!” The idea of StellarNova began when Yael became a mother. “I started thinking about how stories and fun, hands-on activities can allow children to identify with and touch science in surprising ways.”

Yael has another ambition she’s working hard to turn into reality.

“We want kids to have gender-balanced role models in science. I never had a female professor in my entire chemistry career. StellarNova hopes, ultimately, to encourage a wider, more diverse group of people to get involved in science. Through diversity, we’ll get different experiences and a more creative, inventive approach to science and problem-solving.”

That’s why Yael thinks that the Beresheet mission was a triumph. “Sure, space travel is important for scientific knowledge. But what it has really done is to make space and science cool for Israelis.” For Yael, Israel’s experiment in space has another vital message: Science and success depend on being willing to fail. “I dedicated my story of Berrie the little spacecraft to the dreamers who try, fail, and try again. Normally, we push failure under the table. But since the real Beresheet crashed, so many parents have been saying to their kids ‘look at what we achieved’ and ‘hey, we can try again.’ Already, plans for a new Israeli moon mission are being launched. It looks like Israel is serious about failing, getting up, and trying again.”

Over Passover, the holiday of freedom, many of us will be talking about how we can find freedom in our own lives. Yael believes that the tale of Beresheet can help in that quest. “Learning that it is okay to fail gives us freedom. It allows us to dream big.”

Have a happy and free Passover. 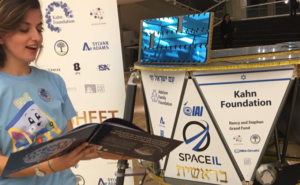 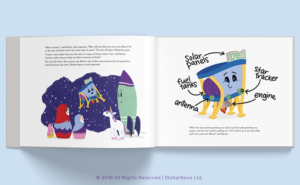