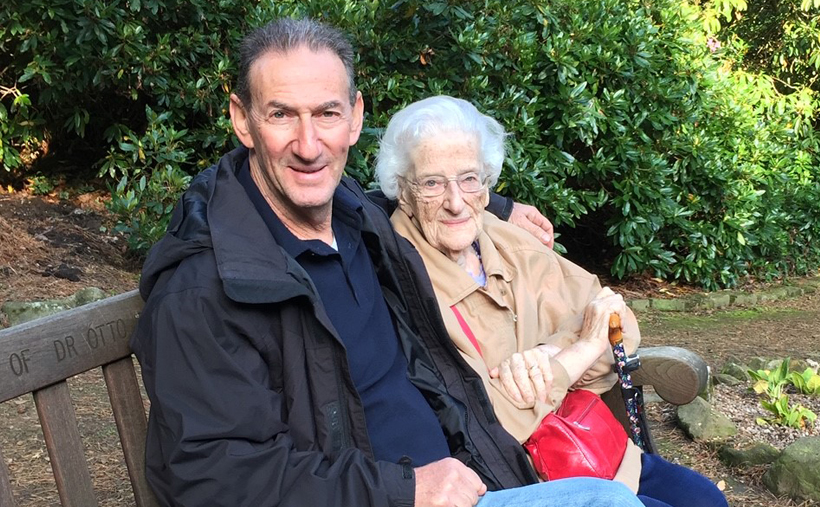 Sigmund Freud and My Family

How many of us have a list of interests and hobbies we wish we could pursue if only we had the time? Well, due to the Coronavirus and the slower pace of daily life, one thing that many people have is time on their hands.

In David Magen’s case, this meant that he was able to dedicate more time and energy to his family history. David, who joined Da’at’s business development team eight years ago, after working as the director of the missions department for JFNA, has always been fascinated by his family’s story. With travel restrictions in place, David took full advantage of his time off from the world of travel to explore his own roots. David shared with us some fascinating nuggets of information he uncovered about his family in Vienna, including the discovery that Sigmund Freud bought his glasses from his grandfather’s optician store in Vienna!

It’s 1939 in Vienna. My grandfather, Erich Oppenheimer, owner of Optiker Alois Oppenheimer, the successful optician store that had been handed down to him by his father, Alois, had every reason to worry.

Yes, the store, which was located on the ground level of the famous Bristol Hotel, was hugely successful. You couldn’t have picked a better location, facing the building of the Vienna State Opera on the Kartnerstrasse. The store attracted clientele such as Emperor Franz Josef, Gustav Mahler, Harold Lloyd, and royalty from India.

But none of that mattered. Hitler had one agenda: to liquidate the Jews, and my grandfather knew that. Just the previous year, Erich had made the painful decision to send his two daughters (one of them my mother, Dorothy) on the Kindertransport – away from the danger of the Nazi regime.

My grandfather knew that time was running out. He and Hannah, my grandmother, had to get out of Vienna. The only way out was to have a work permit abroad. So when he found an ad in the International Opticians’ Journal for a position in England, it was a sign from heaven. He applied for the job and was accepted. In September 1939, he left behind his treasured business that he had nurtured and developed and headed to Newcastle, England, where his new job awaited.

Except there was no job.

An optician by the name of Senator had placed the ad in the international journal, hoping that he could save a Jew under the guise of looking to hire. Sadly, my grandfather passed away at age 48 in 1950 after spending a year interned as an “enemy alien” on the Isle of Man. My grandmother moved to Cardiff, Wales, where her brother had settled, and lived until the age of 93.

What happened to my grandfather’s optician store? His nephew (David Oren) served in the Jewish Brigade of the British Army in WW2, and after the Italian Campaign in 1945, made his way to Vienna, armed and still in uniform. It didn’t take him long to throw out the Nazi Shwartzmuller (rumor has it with a pistol) who had “inherited” the shop during the Nazi regime. David was even able to initiate the process in which the shop was returned to its rightful owners!

Fast-forward to the 1960s when I made Aliyah and lived on Kibbutz Mahanayim. It was there I met and became friends with a relative of the man who had saved my grandfather’s life with his job ad – Mr. Senator. I almost fell on the floor when I found out the connection.

About a month ago, my family history took yet another interesting turn. On the eve of Yom Hashoah, Holocaust Remembrance Day, I watched the documentary “50 Children: The Rescue Mission of Mr. and Mrs. Kraus,” which tells the story of Gilbert and Eleanor Kraus, a Jewish couple from Philadelphia who traveled to Nazi Austria in 1938 and saved Jewish children in Vienna from the Holocaust by finding them new homes in Philadelphia. Since my parents had escaped from Vienna, this documentary was of particular interest to me. The film contained black and white visuals from Vienna, compiled from original archive materials.

I froze when I heard the narrator refer to the Bristol Hotel. The camera zoomed in on the hotel where my grandfather’s shop was clearly visible! I immediately took a somewhat primitive screenshot of my TV, and shared it with my family, since this is the only visual documentation we have ever seen of the shop during the Nazi regime.

After the initial excitement of seeing the shop on my TV screen, I reached out to the filmmaker (Steve Pressman) telling him about our family history. I asked him if he had seen other photographs or film footage of the Bristol Hotel (and of course our shop) when preparing the film. Sadly, he hadn’t. However, he told me that on one of his visits to Vienna while making the film, he happened to visit the Freud Museum, and by chance took a photo of Freud’s eyeglasses which are part of the exhibition. Believe it or not, the glasses came from our shop, as can be seen by the name Oppenheimer on the case!

It is unbelievable to me that in 2020 I am still unraveling more and more of my family’s story. And while it is true that travel has yet to recover, I am hopeful that Da’at will soon be resuming travel to Vienna – which as well as being one of our most popular destinations in Central Europe also occupies a warm place in my heart.

Cover photo: David & his mother sitting on a bench that they donated in memory of David’s late father, Dr. Otto Fleming.