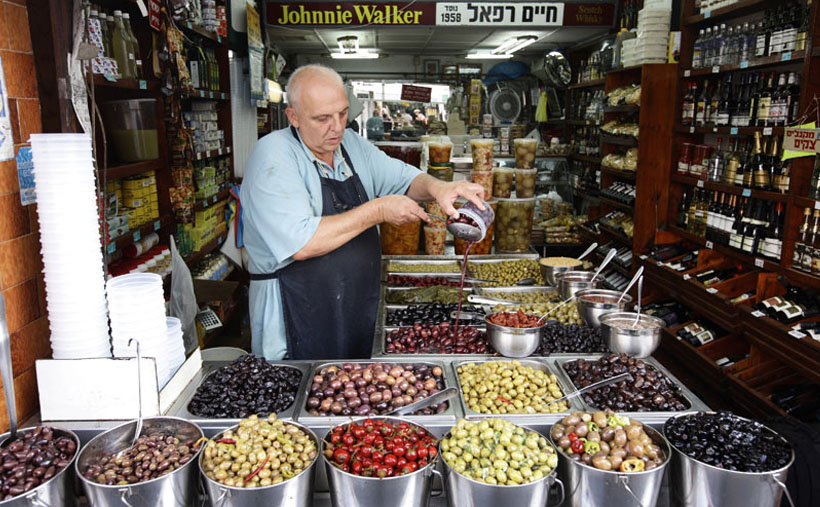 A tale of a Greek family

This is a story about Greece and Israel for Hanukkah but there is not a Maccabee in sight. Zadik was born in Israel but has never let the taste of Greek food leave his mouth. For three generations, his family have run a delicatessen in south Tel Aviv’s Levinsky Market, amongst the restaurants and shops brought to Israel by Jews from the Balkans. Using the traditions passed on by Zadik’s Greek parents, they’ve served cured olives, gourmet cheeses, smoked fish and much more to happy customers for almost sixty years. As Zadik puts it, “the food of Greece, of the Balkans, is the best. It’s the simplicity and freshness. The way we use salt and pepper but not too many spices. And the love of lemon. We use lemons in everything.”

Zadik grew up in a home full of Greek food and music. His parents, Haim from Salonica and Esther from Corfu, were survivors of the Holocaust who had lost their entire families to the Nazis. Despite the heartache, Zadik remembers his mother singing Greek songs as she prepared great meals. His father established a choir of Greek survivors who once sang for the president of Israel. “Greek music and food was happiness for my parents,” says Zadik. “We ate loukoumades, Greek doughnuts, not just for Hanukkah but all year round.”

His parents built their lives in Israel from nothing says Zadik. “My father arrived with a shirt, pants and an accordion. No family, no Hebrew, no profession.” Riding his tricycle, Haim began supplying the Greek restaurants that were blooming in the Levinsky area. He took over a store that stocked little except “soap and mice” and transformed it into a deli seasoned with Esther’s recipes and famously good cooking.

The Haim Rafael Delicatessen continues to flourish today through love but also through labor. Lots of it. “My father worked like a donkey,” says Zadik. “And in 1969, he caught me and said, ‘Either you join me in the deli or I’ll retire.’” Zadik had just finished the army. “I thought I’d stay in the deli for a year or two. But it’s almost fifty years now.” It’s not easy “opening every day at 7am and closing at 6pm.” Zadik jokes that if a criminal was sentenced to run a deli, he’d beg to be sent to jail instead. But a passion for Greek food runs in the family’s blood. Zadik’s son, also named Haim, has joined the business. “My dad started the deli,” says Zadik. “I continued it on. Now it’s my son’s turn.”